Stroke patient raises £2,000 for specialist unit at the Cumberland Infirmary 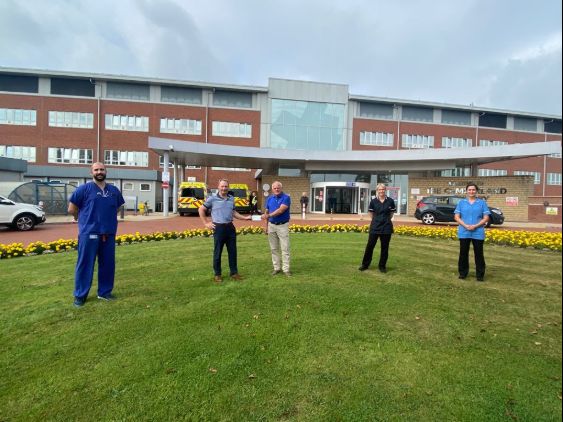 A stroke patient who was admitted to the Hyper Acute Stroke Unit at the Cumberland Infirmary has thanked the unit for his care by handing over a £2,000 donation.

To say thanks to the unit that looked after him, he organised a charity golf day, with his friend – also called Geoff - at Carlisle Golf Club. The event, called The Geoff Byers Charity Golf Day, raised £2,100.

He said: “My dad had a particularly bad stroke about 15 years ago and if this unit had been here then he may have recovered and enjoyed a better standard of living than he did.

“The unit is great for the area as it means more special care can be given in that critical period – rather than having to transport a patient to Newcastle.”

Mr Fell, of Linstock, near Carlisle, is still under investigation and regularly attends appointments at the Cumberland Infirmary to see what medication is going to be suitable for him going forward.

He said: “When you’ve had a TIA they go through a checklist and it’s a bit like a process of elimination.

“When I was on the ward I was very impressed with the care I received during the first critical 24-hour period and I asked one of the chief nurses if they accepted charitable donations. She said they did and so my friend and together Geoff and I organised the charity golf day. “Geoff has been organising the annual event for 25 years and I have been helping him in recent years.

“I will definitely continue to raise funds for HASU as I am grateful for all that they have done.”

Lisa Pearce, staff nurse practitioner, said: "We are really grateful for this recognition. It is a moral booster for staff and very much appreciated."

The HASU opened in December 2019 and is a separate unit with capacity for up to 10 stroke patients where they can spend up to 72 hours being cared for around the clock by the team of doctors, nurses and therapists. After this period, the patient is transferred to the acute stroke and rehabilitation ward at either the Cumberland Infirmary or West Cumberland Hospital or discharged back to their home where they can be supported by the Early Supported Stroke Discharge team.