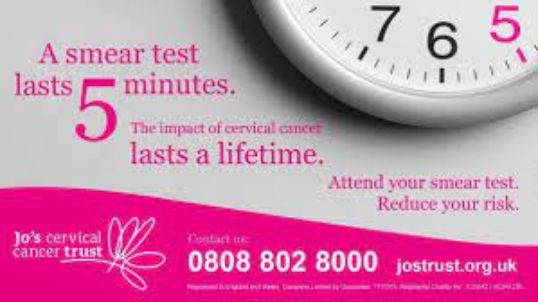 Smear tests aren’t easy for everyone, but they can save lives.

The number of people going for smear tests is lower than ever, yet they prevent 75% of cervical cancers! So while they may not be pleasant, they are important.

Cervical cancer is the most common cancer in women aged 35, and 75% of cervical cancers are prevented by cervical screening (smear tests).

Cervical Cancer Prevention Week runs from January 17 to 23 and it encourages women to reduce their risk of the disease by promoting the steps they can take to look after their health.

NHS England data shows nearly a quarter of the 125,836 women eligible for cervical screening in Cumbria during 2020-21 did not attend an appointment.

In Cumbria, 77 per cent of those eligible were screened – down from 79 per cent the year before.

It means an estimated 28,710 women in the area missed out on the potentially life-saving programme during the pandemic, when invites to screenings were temporarily suspended and appointments delayed.

Many women were also put off attending their screenings due to concerns about their risk of catching coronavirus during the appointment, according to research from Jo's Cervical Cancer Trust.

Samantha Dixon, the charity's chief executive, said the national drop in screenings was not unexpected in light of the pandemic but said it remained a worry.

She said: "Our health service is under unprecedented strain at the moment and facing a long winter.

"It will only lead to even more cancers that could have been prevented.

"In some areas coverage is lower than one in two and that should be ringing alarm bells."

Sister Julie Thomas, an oncology nurse specialist, from North Cumbria Integrated Care NHS Foundation Trust, said: “GP practices in Cumbria are all open during Covid pandemic and practice nurses are ready and available to take your smear test. Please do not defer your smear if it is due, attending for your smear could save your life.

“If you are not due your smear but you have developed any concerning symptoms then please make an appointment with your GP as soon as possible for examination.”

How can you reduce your risk of cervical cancer?

Who can have a Smear Test?

You are automatically invited for cervical screening if you are:

You may get your first invite up to 6 months before you turn 25. You can book an appointment as soon as you get the invite.

It is very rare to develop cervical cancer if you are under the age of 25 or over the age of 64, if you have had regular cervical screening.

If you have experienced any of these symptoms you should contact your GP.

Smear test appointments are available through NCIC’s Sexual Health Clinics. During this week our Sexual Health Teams will be sharing information about Cervical Cancer on Facebook and on boards in their clinics.