Getting people back on their feet in Africa

A specialist amputee physiotherapist from North Cumbria Integrated Care NHS Foundation Trust has been collecting and storing second hand prosthetic limbs for charity that would otherwise go to landfill.

Iona Palmer-Smith who works in Disablement Services at the Cumberland Infirmary in Carlisle has donated the unwanted limbs to Legs4Africa. 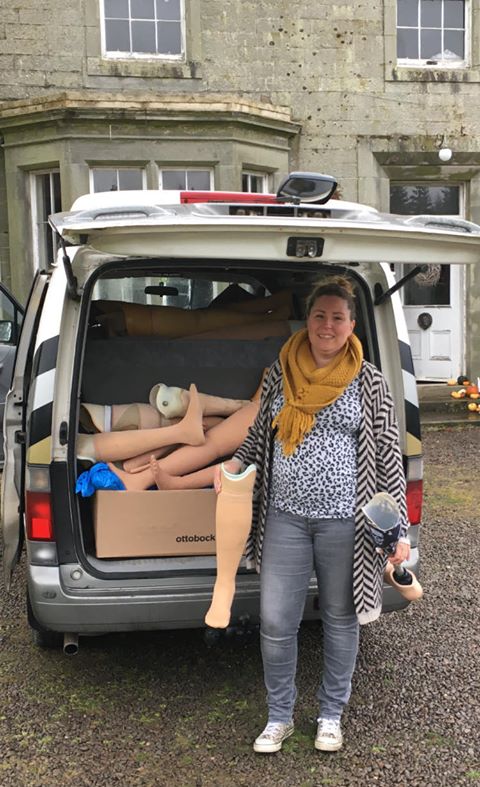 Iona said: “I’ve been collecting the old prosthetic limbs on behalf of patients and colleagues, meaning rather than them going to waste they can be reused by those who wouldn’t usually be able to afford or benefit from them.

“I was inspired to do something after seeing Olivia Story donate 25 of her own prosthetic limbs in April this year. Since then I have collected more than 50 limbs which have been collected from Carlisle and will be driven to Gambia in Africa at the end of December in a van that is also being donated for rehabilitation transport purposes.”

As prosthetic limbs cannot be reused or recycled in the UK, the charity estimates that around 5,000 prosthetic legs end up being binned each year.

Once the donated limbs have been collected, they are sent to dismantling teams at Men’s Sheds so they can be broken down into components. When the parts arrive in Africa, they are then transported to a number of partnered hospitals in Africa and reconstructed with local prosthetists and therapists to provide prosthetic limbs for those who would normally be unable to afford such technology.

Iona added: “We have now taken it one step further by organising ourselves so that all redundant limbs from North Cumbria Integrated Care NHS Foundation Trust go to Legs4Africa via me from now on.”

Further information on 'Legs4Africa' and 'Men’s Shed' and how you can donate prosthetic limbs can be found via the links below and you can also get in touch with the disablement centre service to donate through them. Call them on 01228 814783 or find them on the bottom floor of the Cumberland infirmary.