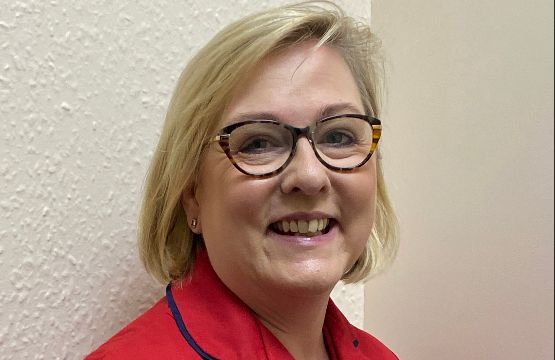 Anna is the Chief Nurse at North Cumbria integrated care NHS Foundation Trust.  She has shared her career story for staff who would like to reach executive level in the NHS, to provide insight into the types of role that got her to where she is today; and offer some advice on how she feels that experience has benefitted the role she is in now. Anna said:

“I always wanted to be a nurse. I gained my 5 O Levels; I worked at Lloyds bank to gain some experience of working with the public, and at the age of 19 secured a place at Shotley Bridge Hospital. Shotley was a district general and quite similar to Cumbria at the time, with some elements of specialist work, and I found it really interesting.

It was really difficult to find a nursing job, and I was the only person to get a job in my training year. Once I had completed training I knew that I wanted to be a midwife. At the time, you had to have two years of nursing experience first; so I gained a role on a genital-urinary medical unit, and I also worked in Gateshead on a female surgical ward, specialising in gynae and oncology.

After this I applied for midwifery and completed my training at Cambridge, with 6 month placements at Hitchin, Peterborough and Rosie hospitals. Once qualified, I wanted to specialise as a midwife sonographer.  I worked at Kings College in London, and on my days off I worked for free with Dr Nicolaides in foetal medicine at the Harris Birthright Centre and he taught me how to scan.

After this I secured a role at Guy’s with Professor Lindsey Allan in the foetal heart unit. I worked in midwifery sonographer research, and gained a senior midwifery role at King’s, and I ran the foetal medicine unit. This was my favourite job and I would go back to this.

I moved back up North and worked at Northumberland as the senior midwife, and there I led the development of scanning at 12 weeks, and implemented the introduction of drug and alcohol services locally. After this I completed a post grad in ultrasound.

I got married and had my daughter, Lucy, and I had a moment to reflect and I decided to take a break from midwifery. At this point I gained a degree in public health, specialising in health visiting. I worked in Cruddas Park and Byker, and at the time children’s centres were being developed and we opened a children’s centre. I also worked as health team coordinator, carrying out a health needs analysis and before our funding was pulled I became team leader for health and developed safeguarding adults services around that.

Although I moved away from midwifery as my fulltime role, throughout this time I maintained a bank midwife contract, and I always scanned. After my work in public health, I went back to midwifery and became a matron for foetal medicine, and I was part of some regional and national work around developing training for foetal heart scans. While in this role I also spent some time acting as head of midwifery.

I then underwent a development programme and completed a Masters in practice development and leadership. This then led to role as governance in surgery at Freeman, and I opened the centre for transplantation. The role helped to determine that I didn’t want to be a business manager in the longer term, it was too far from patients.

I took some time to reflect and think ‘what do I want to do?’.

After this I gained a role in NHS England as the head of quality for the North East and Cumbria, and I also acted up as the deputy director of nursing. I was there for 2 years, and during this role I also linked closely with North Cumbria University Hospitals NHS Trust (NCUH).

After this I then became the deputy director of nursing at NCUH and I worked under two great chief nurses; however I felt I needed another step before reaching that goal, and I gained a role at the North Cumbria CCG.

I am now the chief nurse for NCIC. When I retire, I want to scan again and go back to foetal medicine.

I have loved all of the jobs I have done, I have never, not enjoyed a job; but if I could have my time again, I would work with Professor Kypros Nicolaides - being at the forefront of everything developing in foetal medicine, it was amazing.

I would say to anyone who wants to reach director level that I found it really helpful to gain experience working in primary care, acute services and a regulatory body, as that has given me the ability to understand how they think.”

If you are interested in joining the Trust you can find out more about career opportunities on our website.