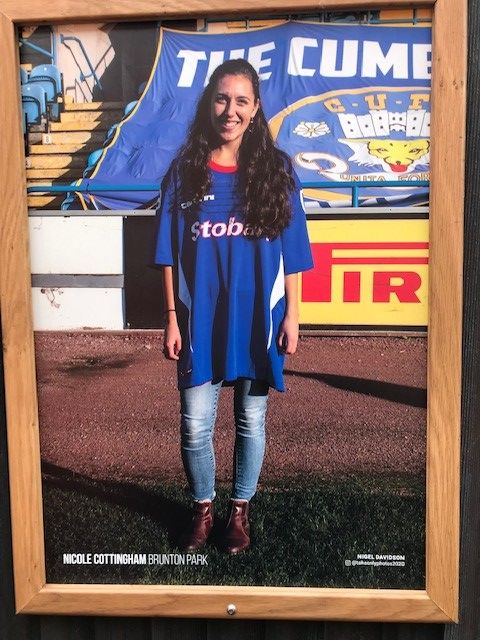 Nicole Cottingham, who works as the Trust’s Patient Experience Facilitator, is part of the Football Supporter’s Association and Kick It Out’s Fans For Diversity’s latest initiative, 'My Club, My Shirt'.

The initiative showcases an array of supporters from diverse backgrounds donning the Blues' kit, representative of a unified messaged.

The exhibition - showcasing the portraits - is currently on display in the gardens of Tullie House in Carlisle and will eventually go on display at Brunton Park’s East Stand concourse.

She studied English Language and Linguistics at the University of York, completed a video production internship in Cyprus and went on to work with asylum seekers and refugees in Norway.

Prior to joining the NHS, Nicole worked in the third sector in community development and volunteer management, working with communities from ethnic minority backgrounds.

She said: “I’m an extremely new Carlisle United fan – feel like a bit of fraud calling myself a fan because I’ve only been to three games! The first game I went to was in September 2021, which is where I caught a bit of a bug. I had never watched live sport before then, so it was an amazing experience to be part of a crowd watching something unfold where anything is possible. It probably helps that Carlisle have scored in all three games I’ve been to see – won two of the games and drew in the other.

“Outside of my work at NCIC, I’m a co-director of an organisation called M-Unit Carlisle. We work with people of colour in Carlisle to deliver projects to increase true representation and provide a counterpoint to traditional views on equality and diversity. We’ve also been working with young people of colour throughout the pandemic on projects involving art, music and sport. The young people we’ve been working with are obsessed with football and Carlisle United have been extremely kind to us.”

Nicole explained how she first got involved with the club’s diversity and inclusion project.

She said: “The Carlisle United Community Sports Trust invited us for a day full of activities back in September last year, which included free tickets to the Carlisle v Scunthorpe game. The club have also invited us back a couple times since then and offered free tickets for the young people to come along. On the back of the young people coming to the games, the club also invited us to be involved in the My Club, My Shirt project. The young people were absolutely thrilled to get their picture taken wearing Carlisle United kit and somehow I snuck my way in there too.

“I grew up in South Africa so I’ve always been a rugby fan and I’ve never really understood why people love watching football so much. When I moved to Carlisle, I used to see crowds of people walking down Warwick Road on a match day and it really baffled me. I always felt like an outsider in that sense, that I had no reason to go into the grounds or watch a game. So it’s been such an honour to be invited in and to have my photo as part of the exhibition. I love the sense of community which is not only tied to a place but also to a team and its history.”

Nicole says her favourite player is Jordan Gibson. She said: “I think he’s brilliant and I even got the chance to meet him at the Carlisle United Photography Exhibition at Tullie House. I was surprised at how star-struck I got! I’ve got to say though that Omari Patrick was an absolute machine in the Rochdale game on Tuesday.”

Nigel Davidson, vice-chairman of Carlisle United Official Supporters Club (CUOSC), said: "In recent years the make-up of the City of Carlisle and the County of Cumbria has changed significantly and the club and supporters want to celebrate the current diversity of the community.

"CUOSC and the club both want Brunton Park to be seen as a safe, welcoming and inclusive place for all who want to enjoy the spectacle of league football."

“The new project looks to widen the supporter base in terms of age, ethnicity, sex and all other protected characteristics to create a reflection of Carlisle's community.

There's an emotional message behind many of the portraits, some of which are shared on the portraits themselves.