Patient thanks staff for excellent care 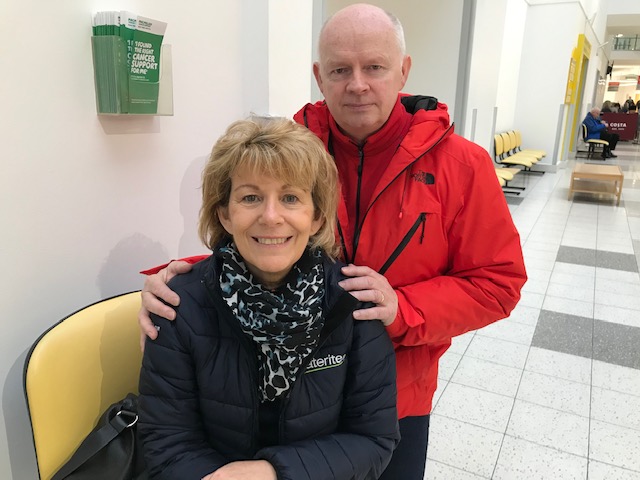 A patient has thanked staff for the excellent care she received from medical staff at North Cumbria Integrated Care NHS Foundation Trust after being diagnosed with neck cancer.

Helen Nattrass, of Carlisle, was given the devastating news after a routine trip to the doctor in late 2018.

She said: “I’d had a bad cold which wasn’t really going away so I went to the doctor as my glands were swollen.

“It was a locum doctor and it was her last day in her job. She said she was going to send me to the hospital for a scan. I’m so glad she did.”

Helen, who works as an area sales manager for Caterite, was diagnosed with neck cancer on December 13, 2018.

She started her treatment on January 14. Six weeks of intensive radio and chemotherapy followed at the Freeman Hospital in Newcastle and, in April 2019, Helen was given the fantastic news that she was cancer free.

“The treatment she had was seamless from start to finish and the care Helen received was off the scale,” said Mr Nattrass.

“We wanted to praise the hospital and it’s difficult to do that. It is easier to make a complaint than to say thank you.

“People are quick to criticise but when you have good news you should praise them.

“They really do care. I now have a cancer free wife.

“Nurses in Mr Robson’s department text Helen when she went over to the Freeman Hospital to check that she was okay and Helen was really touched by that. It was something that took a second to do but it meant so much to Helen that they did that.

“The co-ordination in the community was just so joined up and seamless. Nothing was ever a problem and everyone was so professional.

“We just wanted to show how grateful we are. We were blown away by the communication between the two hospitals. It was so efficient.”

Chris and Helen recently returned to the hospital to thank consultants Andrew Robson and Graham Putnam and all the staff in ENT and cancer services.

They have also thanked the staff at the Freeman Hospital in Newcastle and those that work in the community.

This week, they presented staff with a framed picture of Buttermere which they thought could go on the wall in the ENT waiting area.

Helen, 61, said: “We walked around Buttermere with some of the nurses last year as part of the head and neck cancer support group.

“It was a lovely thing to do and we thought that a picture of Buttermere would remind the staff of that day and brighten up the waiting area.

Last year, Lorcan Byrne, the managing director, of Caterite, ran the Coast to Coast and raised £7,000 for Cancer Research UK.

“We were very grateful to Mr Byrne for doing that and to anyone who raises money for such a worth cause.”