The NHS in the North East and North Cumbria saw record levels of demand across ambulance, hospitals and primary care services during November and December as it tackles its toughest winter yet, whilst also delivering its planned programme of tests, operations and cancer care. 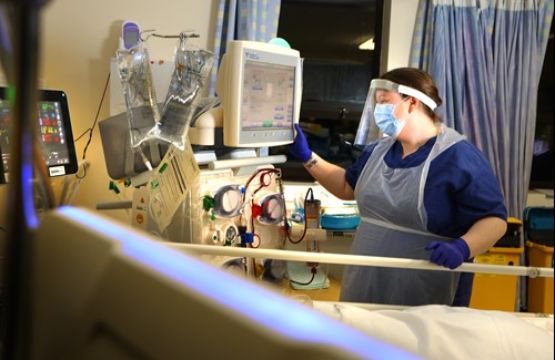 Figures released by NHS England today (12 January) have confirmed that in the region during December unprecedented levels of demand were seen in; the number of calls to 999 and 111, in emergency department attendances - the highest level for any month in 2022, and in general practice face-to-face appointments remained at significantly high levels.

This increase in public needing NHS help has had a knock-on impact for waiting times for emergency care, planned treatments and operations.

A&E four hour waiting times performance for December decreased to its lowest level in the region to 70.2%. This compares to a national performance figure of 65%.

However, despite high demand, the region is performing well above the national position for planned care with 71.2% of patients seen within 18 weeks, compared to 60.1% nationally (and a national target of 92%).

Dr Neil O'Brien, executive medical director for the North East and North Cumbria Integrated Care Board (ICB), said: "People needing help in our emergency departments across the region is nearly 30% higher this December than in the same period in 2021.

"This has put enormous pressure on our teams who have had to work incredibly hard to deal with this significant rise in the number of people needing medical attention, with many people presenting with flu, Covid-19 and respiratory conditions. We’ve also had an increase in staff sickness adding further challenges. We really do want to thank all our teams for their dedication in what has been a very challenging time.

"Despite the pressures across the region we have sustained strong levels of planned operations which has allowed us to decrease the numbers of patients on our waiting lists, as well as limit the number of patients waiting in excess of 52 weeks. We have also seen an improvement in our diagnostic performance and cancer backlog numbers are now at the lowest level since March 2022."

Dr O'Brien added: "The increase in the number of people needing medical attention has obviously affected waiting times. Delays in patient care are not something any of us would want for our families or friends and everyone across health and care are doing the best we can to ensure the safety of the patients in our care."

Cases of flu in the region's hospitals peaked just before Christmas and are now decreasing, as are the number of beds in hospitals occupied by flu patients. Covid-19 numbers peaked in early January and have now started to decrease. The peak that was seen in January 2023 was lower than in previous peaks.

The number of appointments in primary care continues to remain higher than the same period in 2021, with over 1.74million appointments taking place in November 2022. Over 73.5% of all appointments in the North East and North Cumbria took place face-to-face.

Dr O'Brien, who is also a GP in Chester-le-Street, said: "GP practices are also experiencing an unprecedented and increasing demand from patients in their care. Over 407,000 people are seen on average every week with practices triaging every patient so they can see the right person for their needs – this might be a GP, or nurse or it could be a pharmacist, physiotherapist or podiatrist. We'd like to thank all primary care staff for everything they do and for patients understanding when local practices are under pressure.

“The NHS is here to care for people and people should not delay seeking medical advice and help if they need it, but we ask them to think carefully about which service they access.

"We'd like to thank our communities for their support and patience. You can continue to help us by keeping emergency departments for life threatening emergencies only and by thinking pharmacy, GP and 111 first, for other minor illnesses and injuries. If you're not sure which service you need, visit www.nhs.uk or download the Healthier Together app."