Symptoms to look out for this Bowel Cancer Awareness Month

A consultant in colorectal surgery at NCIC has spoken about the symptoms of bowel cancer and what you can do if you are worried. 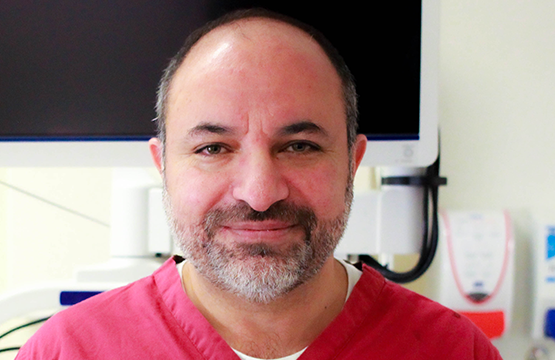 “All bowel cancers if left untreated will eventually spread most commonly to the liver and lungs.

“The incidence of bowel cancer increases with advancing age however bowel cancer can happen at an early age especially if there is a strong family history of it.”

Dr Edilbe has some advice for anyone who is worried: “Please get in touch with your GP if you have any bowel symptoms. Your GP will arrange an initial stool test to detect if there are traces of blood in your stool (FIT). If it comes back positive then the GP will refer you to have a camera examination of your bowel (colonoscopy) or to see a colorectal surgeon in the hospital.”

April is Bowel Cancer Awareness Month, it’s an opportunity to raise awareness of the fourth most common cancer in the UK. Every 15 minutes someone is diagnosed with the disease, that’s nearly 43,000 people each year.

Bowel cancer is also the UK’s second biggest cancer killer, however it shouldn’t be because it’s treatable and curable especially if diagnosed early. Nearly everyone survives bowel cancer if diagnosed at the earliest stage but this drops significantly as the disease develops. Early diagnosis really does save lives.

Although the exact cause of bowel cancer is unknown, there are certain factors that may increase your risk.

You can reduce your risk by:

For more information about bowel cancer and details of how to get involved in Bowel Cancer Awareness Month visit bowelcanceruk.org.uk