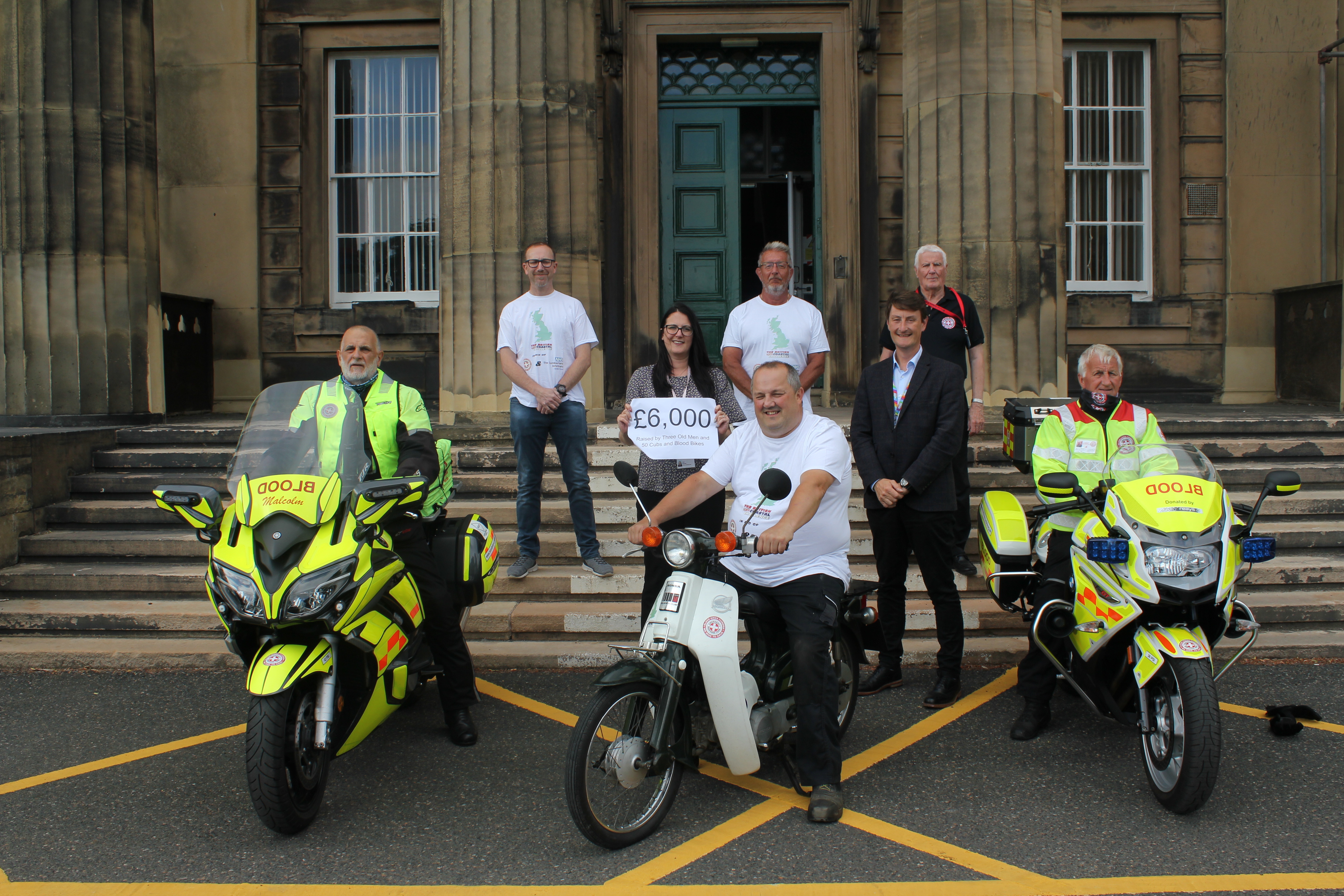 Three motorcycle enthusiasts have raised £3,000 for the Cumberland Infirmary after an epic ride around the UK coast.

The riders set out on a mission on Honda 50 cub machines - a journey of more than 4,000 miles on bikes that can do a maximum speed of 37 mph.

Not only did the three riders fund the entire trip personally, they decided to donate all sponsorship to North Cumbria Integrated Care NHS Foundation Trust(NCIC) and Blood Bikes Cumbria (BBC).

Each cause was chosen for a reason: Denzil Addison, but more commonly referred to as Dee, has been a blood bike rider and fundraiser for BBC for more than six years.

The Cumberland Infirmary is where Andrew Monkhouse, also known as Monkey, was hospitalised for ten days in January with Covid-19. He wishes to show his thanks for the lifesaving care he received and has asked that the funds go towards supporting staff. 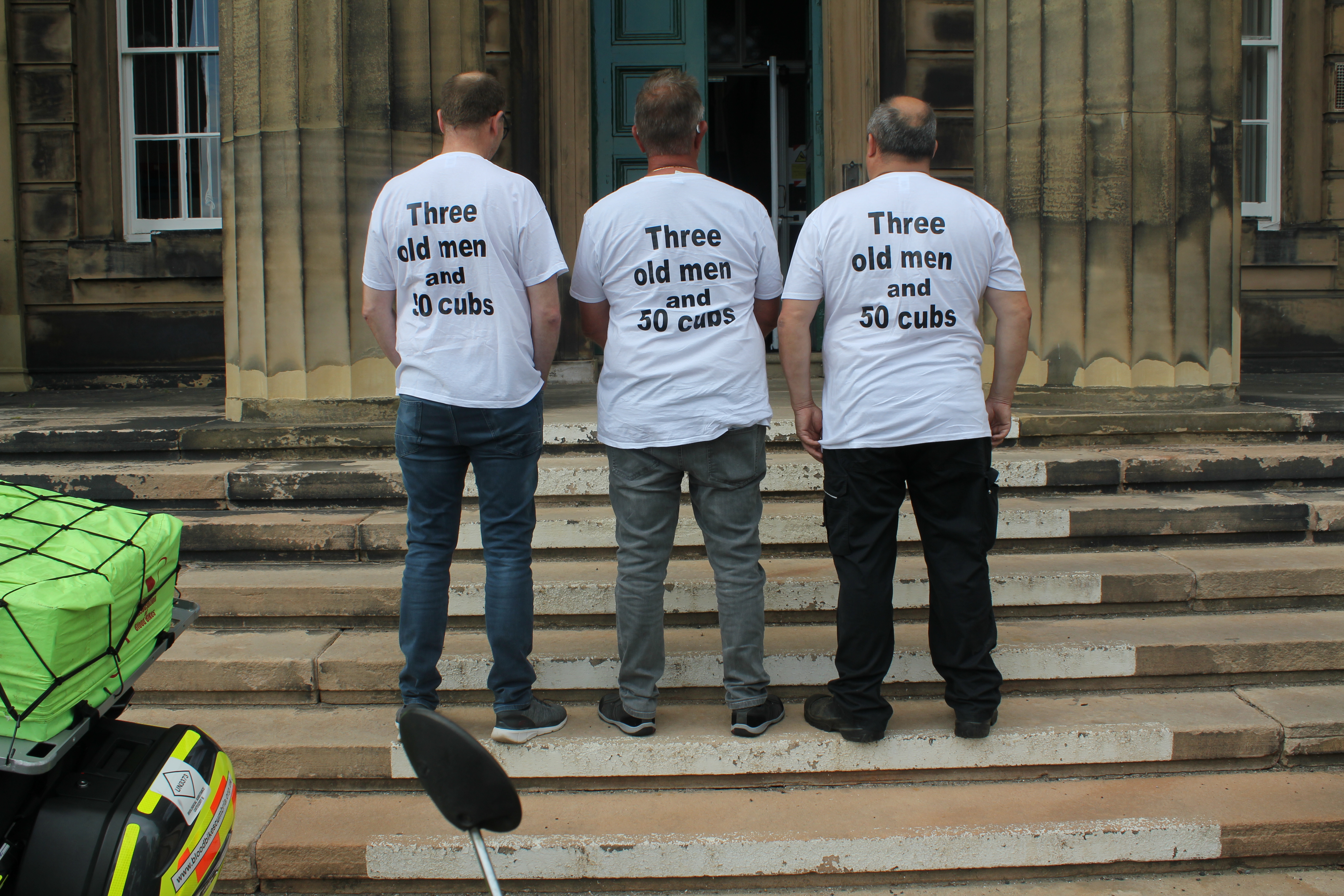 Michael Smillie, Director of Finance, Digital and Estates at NCIC, said: “We are extremely grateful to the bikers for their generous donation.

“It sounds like they had a lot of fun on their mammoth journey and we are pleased to hear that Andrew recovered well after contracting covid earlier this year.”

The journey was split into three legs:

They said: “Part of our mission was three motorcycle daft mates having a laugh and ripping the mickey out of each other continually.”

Dee is the old man of the bunch at 63 and very recently retired, his normal touring bike is a Ducati Multistrada 1260 GT and his local weekend ride a CCM Spitfire Flat Tracker. He has ridden motorbikes on and off since the age of 16. Dee joined Blood Bikes Cumbria in its inaugural year and has served them for six years as a rider and latterly a fundraiser.

Dee, despite his navigational training and the ownership of the groups only on bike satnav, frequently leads the group up the wrong road or dirt track.

After a successful career, Dee now spends his days mithering his long-suffering wife Karen, getting into mischief with his twenty-one-year-old daughter Jodie, holidaying, playing golf, walking and chasing down his two Husky’s when they make a bid for freedom, riding bikes, drinking beer and talking utter rubbish.

Monkey is the ripe old age of 55 and has ridden bikes since he was 16 years old, his touring bike is a Multistrada 950, his Sunday hooligan bike is a CCM Spitfire Flat Tracker, and he also owns several other road bikes most notably a Ducati Hypermotard which he describes as “Bonkers”.

Monkey is the route and accommodation planner and sometimes has difficulty in collating the number of days away with the number of hotel nights he’s booked. On Alpine passes, Monkey develops involuntary facial twitches when he sees cyclists having previously been passed on a downhill Alpine Col by what he described as Chris Froome.

Bowie is the youth of the group at 55 and was born just one day after Monkey. He has been riding motorbikes since 2006, his touring bike is a Ducati Multistrada 950 and his local tarmac terrorist bike a CCM Spitfire Flat Tracker.

Bowie is of a far less portly stature than that of his co-riders, indeed his healthy lifestyle and slim physique make him vulnerable to weight loading on his bike for this jaunt to keep his top speed in line with the butterball twins.

Bowie is the quiet but observant one, with a passion for randomly identifying the obscure.

Bowie is extremely punctual, so when told on a tour the night before that we are leaving the accommodation at 9am he will be ready to depart at exactly that time and not a moment sooner. Naturally, he is often the victim of fictitious departure times.

Before Bowie was blessed with Ducati foresight, he owned a Honda touring bike whose fuel tank capacity was no match for the other two riders Ducati’s. Not being involved in route planning nor navigational duties he often found himself on remote mountain tops with only fuel vapour in the tank combined with zero empathy from Dee and Monkey. Bowie is a light sleeper and refuses to share accommodation rooms with Monkey and Dee who he declares both snore and sound like Walruses in labour due to snoring. Bowie is not involved in the accommodation booking on our trips so to keep the group tight Monkey often books him into the room next door.