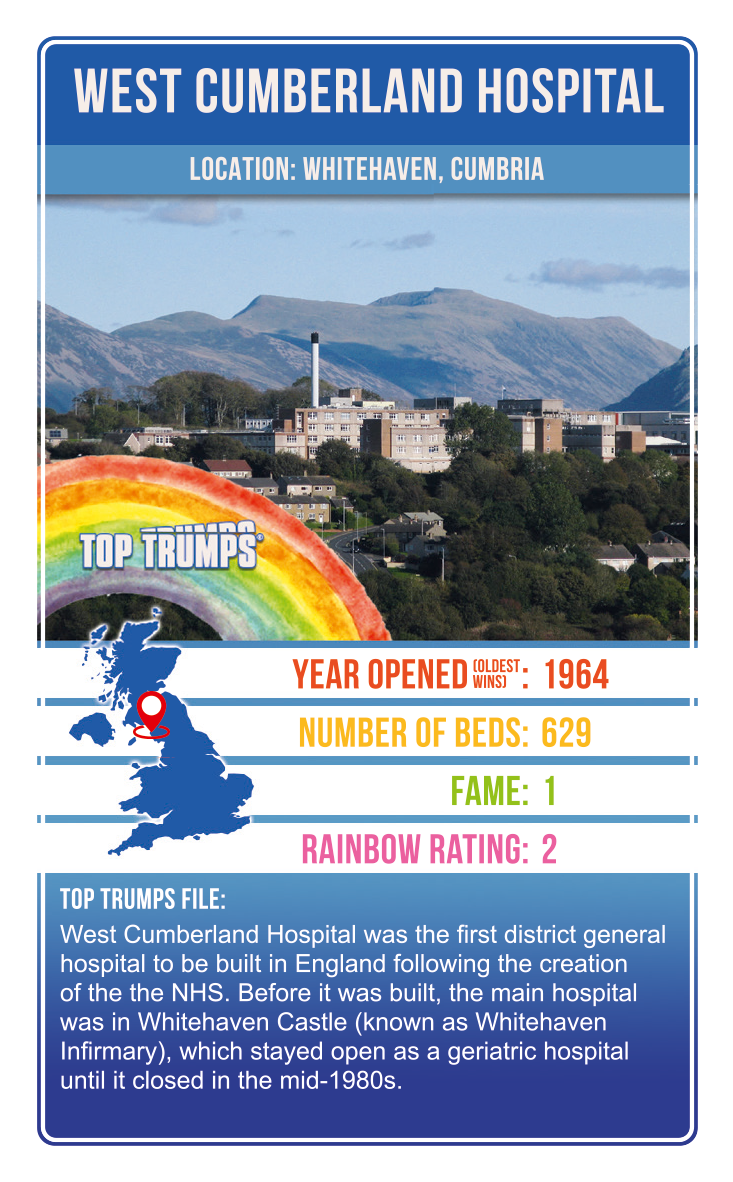 The West Cumberland Hospital in Whitehaven features in a new edition of the card game Top Trumps, which was released this week to honour Covid-19 key and essential workers.

The game – which is raising cash for the NHS - lauds and applauds those key and essential workers who have saved Britain during the pandemic….from doctors and nurses to less high-profile professions such as pest controllers, midwives and sea merchants.

The West Cumberland Hospital features in the Top Trumps Britain at its Best: Hospitals pack.

It says the hospital opened in1964. Top Trumps has given it a fame rating of 1 and a rainbow rating of 2.

It says: “West Cumberland Hospital was the first district general hospital to be built in England following the creation of the NHS. Before it was built, the main hospital was in Whitehaven Castle (known as Whitehaven Infirmary), which stayed open as a geriatric hospital until it closed in the mid-1980s.”

Yvonne Fairbairn, West Cumberland Hospital Site Lead, said: “We’re really happy that the West Cumberland hospital has featured in this latest edition of Top Trumps. It is a lovely endorsement for our staff at this difficult time. The fact it raises money for the NHS nationally is the cherry on the cake.”

Politicians, who are depicted on the Top Trumps card by Boris Johnson and journalists are included too.

One of the four scoring sections in the new game is ‘Unsung Heroes’ .. and in that category it is the partners of key workers who come out top. They get a maximum 10 out of 10.

Binmen and binwomen scored a point lower at nine out of ten. Unsung heroes like doctors (8), nurses (8) and police (7) fare lower.

In its card citation Top Trumps point out that being a partner of a key worker is “stressful and worrying”.

Claire Simon, from Top Trumps, says: “Every single front-line key worker is, of course, a heroine and hero and would each score 10 (or even 11) out of 10 by any reckoning if we had devised a Hero category.

“By creating an Unsung Heroes category we have ensured varying marks, in keeping with the game’s core classic and its unique and much-loved branding.”

“Many of the public we spoke to pointed out that partners too are putting their lives on the line, albeit less directly. As well as being there physically they are providing emotional support. For that reason we listed partners as key workers.”

Claire Simon, global marketing manager at Top Trumps, said: “We are sure that this new edition of Top Trumps can lift spirits in this very challenging and unprecedented period of time, as well as raising money for the NHS, with all net proceeds going direct to the NHS.”

● St. Thomas’ Hospital, where PM Boris Johnson was successfully treated during his recent Covid 19 confinement, features as one of the 30 cards.

● Highest in the ‘Rainbow Rating’ section is Great Ormond Street Hospital, which has a rainbow theme throughout.

● But arguably Britain’s most crucial hospital is a moving one, not a permanent structure or even semi-permanent as in the case of the Nightingale. And that is ‘The Ambulance’ (which features on its very own card).

● ‘The Ambulance’ has just the one bed so in terms of Top Trumps that’s a low rating. However it comes high in the OLDEST category, dating back to 1487.